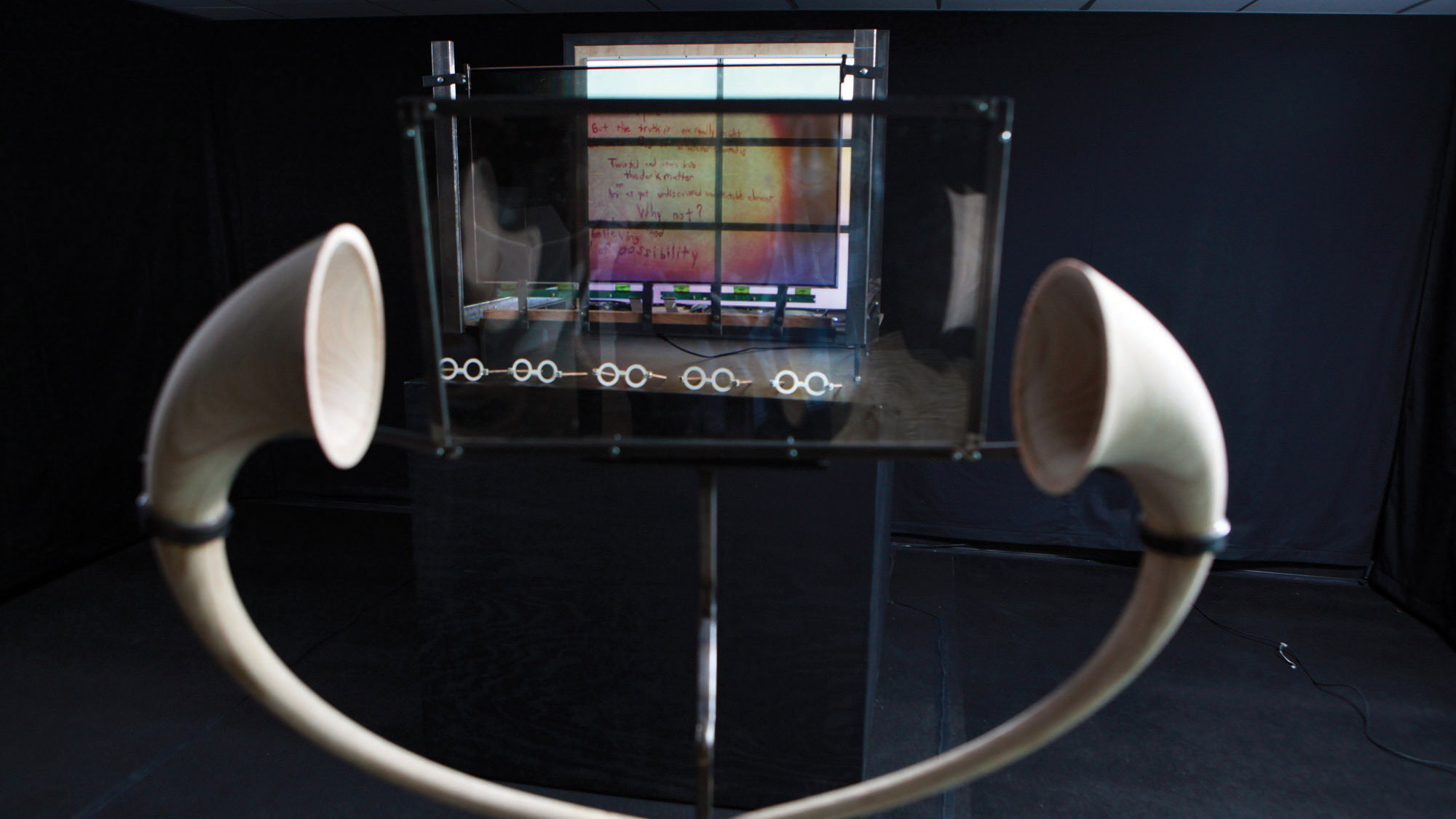 To Many Men Strange Fates Are Given

Brent Green’s new installation, To Many Men Strange Fates Are Given, presents a 12-minute animated film that tells the story of the woman who sewed the spacesuit for Laika, the dog launched into space in 1957 by the Soviets to test whether a living creature could survive space flight. The installation consists of a welded metal frame that holds wooden phonograph horns, multiple planes of polarized glass, and brightly glowing LCD screens. The animation is characterized by familiar elements from this self-taught artist, filmmaker, and performer—hand-drawn, “rickety” animation; wry, off-kilter storytelling; original music played by his band; and rustic sculptural elements—but also shows an evolution in subject matter and technique. Green’s poetic narration ultimately becomes a lament for the disenfranchisement of working people then and now: a theme that connects to his past protagonists—commonplace people who face toil and hardship, and sometimes, redemption and wonder.

Brent Green lives and works in the Appalachian hills of Pennsylvania. His films, live performances, and object-based art have been shown around the world. Most recently, he has had solo exhibitions of his films, along with sculptural and kinetic pieces, at the ASU Art Museum, the Berkeley Art Museum, and SITE Santa Fe. Green often performs his films with live musicians, improvised soundtracks, and live narration in venues ranging from rooftops to art institutions such as the Getty Center, the Walker Art Center, the Experimental Media and Performing Arts Center (EMPAC), the Hammer Museum, the Wexner Center for the Arts, The Kitchen, and MoMA. His films are often screened at film festivals, as well, including Sundance, Film Festival Rotterdam, and Rooftop Films, among many others. Green is currently embarking on his second feature, Anatomical Maps With Battle Plans, a film that will mold his family history through his unique visionary folk-punk style of storytelling and image.

Main Image: Installation view from To Many Men Strange Fates are Given (2012). Photo: Kris Qua/EMPAC.