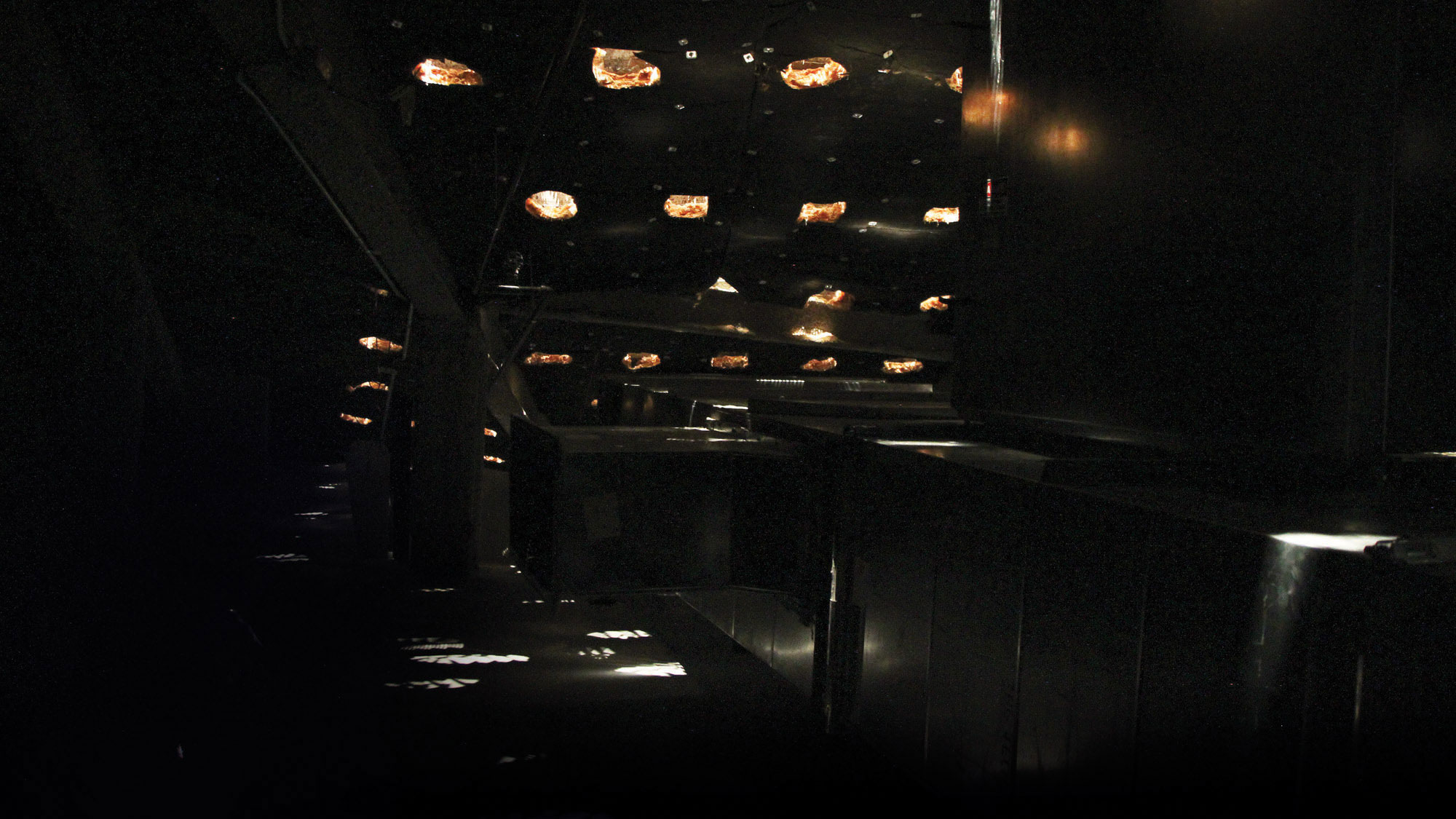 “A staggering work of art, an unparalleled technical feat that is also cinematic poetry of the first order.” — Michael Wilmington, Chicago Tribune

When composer Maryanne Amacher passed away last October, she had been working for two years on an EMPAC-commissioned piece for the Theater. During her residency, she created an ethereal space for floating sounds with 30+ loudspeakers, most hidden in rooms distant to the performance space. Sergei Tcherepnin and Micah Silver, who worked most closely with her on the project, have collaborated on an interpretation of this unfinished work with the hope of sharing a glimpse of what this piece was to become.

Preceding the performance will be a ceremony naming the air plenum beneath the Theater in honor of Maryanne, a space she called The Star Room.

I met Maryanne Amacher in 2003 at Diapason Gallery for Sound in NYC where I was working at the time. We immediately hit it off and spent the rest of the night in Manhattan's Koreatown eating ox-bone soup and talking about everything. Between then and now our relationship developed from a supportive late-night phone friendship to a three-year collaboration on a commission at EMPAC and more recently in caretaking for her and her work after she became ill.

Maryanne remains the most challenging person I've ever encountered. She existed in a world of thought and being that few would dare to even fancy and she challenged us all to be there with her, to dream further and wider and to fly higher. She arrived at this place of depth and time, for entirely rational reasons— she simply wanted to and did follow her flexible and deep mind, ever deeper into a life without compromise.

She had her own and intuitive, rare, sense of time—she used the I-Ching several times a day — considering and questioning the insights of the oracle, and then perhaps disappearing for a week or more, feeling it an inauspicious time to move a project or a conversation forward. She wanted to be so light — almost only light — and like Icarus, I think her death was from flying too close. But it was her capacity to take this risk, to place herself in the headlights of her own being, that inspired so many to go deeper, to go brighter.

She didn't maintain a consistent presence in any single music or art community but rather collected a large group of supporters and close friends globally, many of whom had the privilege of these inspiring overnight phone calls, Glenn Gould-style, wide-ranging, and tangential, finding fuel for the imagination everywhere. In producing her work at EMPAC, I think I spent more time talking with her about recent developments at NASA and the physical beauty of various particle colliders, than music itself. She had a kind of antagonism with sound as much as she was a master — I think somehow, with her extreme and peculiar, puritanical approach to thought, it was nearly an improbable act to adequately capture her inner world as art. But she did it. We all felt it. There was an uncanny, indescribable element to her pieces. Anyone who knew her personally can attest that her embodiment, her effusive being was a clue to her secrets (and she had secrets). As an audience member, watching her behind an enormous mixing console, slowly rocking, conjuring, bringing sound into being— her presence helped, even from twenty yards we could feel that something special was happening.

Maryanne lived as a myth for most of the music world: a bomber hat, snowsuit-wearing exotic living alone in Kingston, occasionally presenting indescribably powerful work in geographically dispersed locations, initiating conversations that simply would never happen with someone else. The nature of her pieces has made them resistant to all manner of comprehensive documentation. There are a few CDs available, but she would only share these, personally, with people after loads of preamble and disclaimer. To say her work is "site specific" doesn't really capture what she was after — nor does the idea of "immersion", which she deplored. Her pieces were the result of extensive perceptual research, which she conducted with extreme care, precision, and method.

Many people think that she was extremely irrational — after watching her work at EMPAC, I came to the conclusion that her extremity was the result of a diligent rationality coupled to her intuition. She was a scientist. I don't think Maryanne believed her work was mystical, or beyond normal life in any way — I think she simply took life and the normal possibilities of the senses seriously enough to investigate them deeply and as completely as her piece of consciousness allowed. I wish twenty years ago she had been tenured somewhere and given a lab. My impression is that this is what she wanted, much more than to be some kind of famous artist, occasionally getting commissions large enough to support her next work. She derided the "gigging musician", for better or worse, and ultimately to her own financial distress.

She was impoverished. It's important that people know that. Maryanne was a rare bird of abnormal brilliance and dedication. It is worth, upon her death, for us all to think about how we can change the structures around us (and by chain reaction our society) to embrace and support people like her. Why was no organization or government capable of keeping her above the poverty line? There could have been a lot more work. Poverty is a full-time job.

Maryanne was an early adopter and then rejector of "sound installation" — moving quickly into the idea of "mini sound series" or "sound screenings", feeling that the installation context didn't provide the focused, collective attention necessary to entrain oneself to experience the work. For someone so dependent on technology, specifically high-end loudspeakers, she was entirely uninterested in the sound the speakers make when hearing them directly. She made great effort, and had success with developing an approach to "structure borne sound", hiding speakers in acoustically coupled locations beyond the presentation space (or inside an enormous plastic lion, as was the case in Berlin recently), and by firing speakers into walls and floors rather than straight into the air. She talked about what she was doing as experimental acoustics and justifiably critiqued the "official" field as being in its infancy, relying on faulty tools of measurement rather than extensive first-person phenomenological research. At EMPAC she was using about 40 channels of audio, only about 4 were actually inside the theater! The rest were as far as three levels beneath, with carefully measured apertures created by doors, air vents, and so forth. She spent a full month at one point, moving one speaker at a time, slowly creating constellations of sound sources that could create sound masses, shapes, gestures, that were "her work" much more so than the sound material itself.

For someone whose pieces often were in the 90-100 dB range (read: rock concert loud), her work was not about the shocking authority of loudness. This is a misunderstanding. Similarly, I think it's a misunderstanding to place her in relationship to "drone" or "noise" or "acousmatic music" or "sound art". She was doing her own thing — she studied with Stockhausen but never followed a rigid compositional system for anything. I believe she was one of a small handful of composer-artists who have truly defined their own terms for their work and I hope we can grant her the respect to attempt to understand her, first, on her own terms.

If you listen into her music, beyond the surface of loudness and constancy, I think one finds that it is extremely melodramatic and even romantic! It’s the inner life of the sound, the motions in timbre, the arrival and departures of shapes, sound characters, and the “after sound” — the sense of sound that exists after hers is gone.

She critiqued many as "pushing around other men's notes" — she used the same sound materials for many many pieces. It wasn’t about the "notes" for her. And let's not forget that she was a woman in the dorky-machismo ghetto of experimental electronic music and perhaps was operating out-of-frame in that regard. Let's allow Maryanne her own model, and understand her on her own terms. She deserves it and so do we.

When Maryanne became ill, she had no structure in place to take care of her or her work. Early on she named her friend Robert The and I as her "power of attorney", neither of us fully understood what this even meant. She gave us some marching orders. Since late July, Robert and I have been working together closely to make sure that an archive is amassed and created to make public detailed information about her work. We'll be making a public announcement in a month or two detailing what will transpire over the next two years, but for those concerned, please know that we have, already, stabilized her materials and plan to make everything available online, for free. We're hoping to launch this comprehensive archive along with several other initiatives in the fall of 2011 to make sure that Maryanne’s work is placed not as a footnote, but as a milestone.

Yesterday I arrived at the hospital about twenty minutes after she passed. In the room, there was a stillness that was so still it was impossible to see. I opened a window. It was the most beautiful day in a month. My guess is she's flying around CERN, hanging out in the Hadron Collider or maybe she finally made it to the Himalayas. God, I'll miss her.