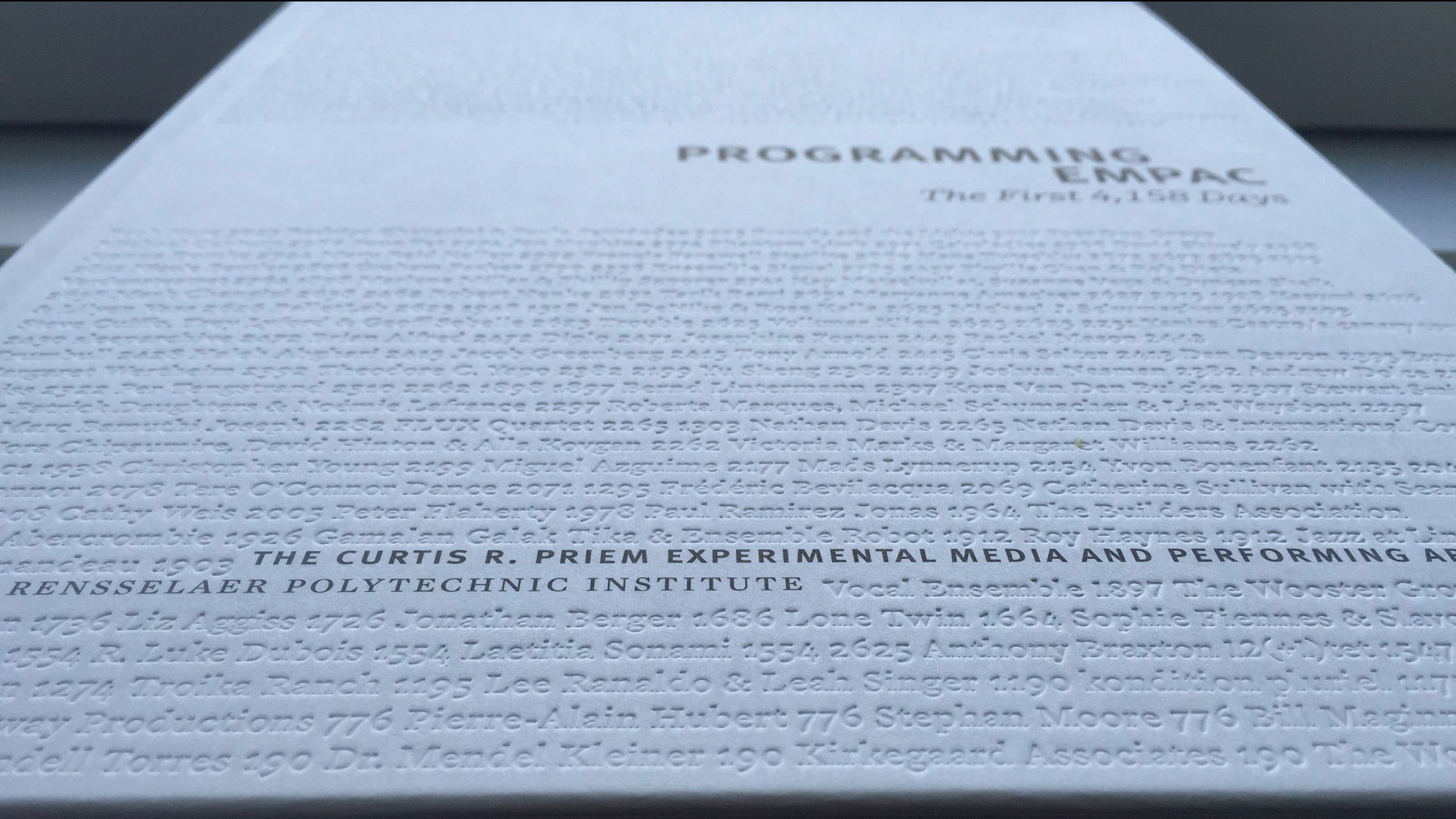 Our book, Programming EMPAC: The First 4,158 Days, presents a vivid mosaic of all the events, projects, and works developed and presented here at the Curtis R. Priem Experimental Media and Performing Arts Center from 2014 back to inception. In our first decade, hundreds of people from a wide range of backgrounds and disciplines came to create new work—artists, scholars, researchers, and students—all in collaboration with EMPAC’s team.

Over 688 pages, Programming EMPAC offers a comprehensive listing of all 413 projects that have taken place, between 2014 to 2004. It begins with EMPAC in its current state, and ends with its first project: the Wooster Group’s THERE IS STILL TIME..BROTHER. Each project entry is a snapshot, with a brief description and vivid images, which combine to form a portrait of EMPAC.

We’re pleased to share this document with you in two forms:

Programming EMPAC: The First 4,158 Days presents a vivid mosaic of all the events, projects, and works developed and presented at the Curtis R. Priem Experimental Media and Performing Arts Center from 2014 back to its inception. Hundreds of people from a wide range of backgrounds and disciplines came to EMPAC to create new work—artists, scholars, researchers, and students—all in collaboration with EMPAC’s team.

The book begins with five essays that describe EMPAC in the context of Rensselaer Polytechnic Institute, its background, and founding framework. The main section of the book then dedicates one or two pages to each project or event each year, stepping backward in time. Cross sections that exemplify the hundreds of academic and campus events that take place annually at EMPAC appear at the end of each section.

In keeping with EMPAC’s fundamental idea that the senses are the portals to perception and understanding, we place this tactile, physical object in your hands. Art and research at EMPAC are “timebased”: performances, films, and interactive installations; immersive environments; explorations into sensor technology; human-computer interaction or real-time data visualization. Although static, this book is a window through which to view what EMPAC set out to do, and what has been accomplished to date.

Open it anywhere and explore, moving forward or backwards through the pages and days. Most of the projects at EMPAC have also been documented in high-quality, multi-camera video and audio in their entirety. In conjunction with this book, the hundreds of hours of this video archive are being made publicly accessible in the lobby of EMPAC.

Programming EMPAC is also a companion to The Architecture of EMPAC: The Tangible and the Tantalizing (2010) a fully illustrated book on the design and construction of EMPAC from the perspectives of Rensselaer professor of architecture Mark Mistur, as well as its architect, acoustician, and theater designer.

EMPAC is an undertaking of scale, scope, and commitment that has not been dared before. Only the audacious vision and commitment of Rensselaer Polytechnic Institute—the nation’s oldest technical university (celebrating its bicentennial in 2024)—made it possible for EMPAC to become this exceptional platform in academia, the arts, and the cultural life on campus. And while these books and video documentation give insight into EMPAC’s ambitions, founding ideas, innovations, and accomplishments, we hope you will visit us to experience our remarkable building, the Rensselaer campus, and most of all, witness the work of artists and researchers who seize the unique opportunity at EMPAC to explore new ideas, create new experiences, and bring new insight into the search for meaning.