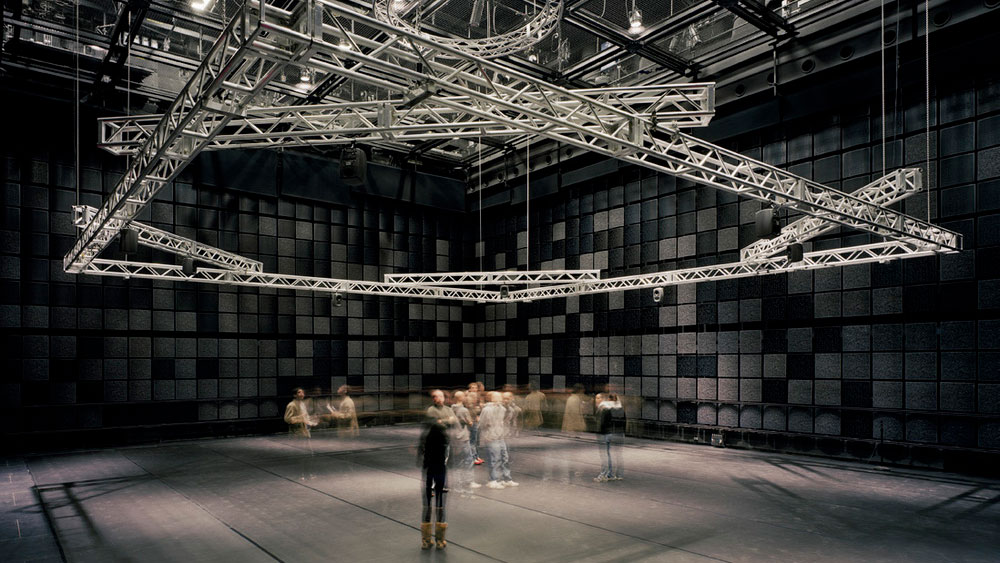 EMPAC building tours are offered throughout the fall season. In October, a curatorial tour led by Vic Brooks and a director’s tour with Johannes Goebel; in November, a not-to-miss network/IT tour with network admin Dave Bebb and a video-focused technology tour will be led by video engineer Ryan Jenkins.

Visitors should meet outside in front of the East (campus) entrance at 1:45PM.

Join EMPAC's Time-Based Visual Art senior curator Vic Brooks for a behind-the-scenes look at EMPAC’s extraordinary production facilities. From precisely calibrated studios, to a concert hall on springs, the tour will delve into the acoustic and visual potential of EMPAC’s venues for the making of complex artworks, along with their approach to the connection of EMPAC’s artists and audiences.

Join EMPAC’s founding director Johannes Goebel for a tour of the building (and overview of the program) that he helped realize and has led through EMPAC’s first 13 years. Goebel will take visitors through the EMPAC building with an eye and an ear to the “human-scale” functions he strove to achieve in taking the project from a lofty vision to one of the world’s most advanced media centers.

Join senior network admin Dave Bebb for a tour offering a look at the center from an information technology perspective. With miles of fiber optic cable linking all four venues as well as the audio and video recording facilities, EMPAC is an environment where physical and digital worlds seamlessly intersect.

From 3D film productions to green-screen animations, flying cameras, and panoramic projection environments, EMPAC is a lush visual world, and video engineer Ryan Jenkins is at the center of it on a daily basis. This tour focuses on EMPAC as a film production facility and high-resolution screening venue.

All Tours are at 2PM.

Note: Tours have a VERY LIMITED capacity and are for campus faculty, staff, and students only at this time. If you are interested in bringing a class or scheduling a specific tour for your campus group, please contact the box office and we will get you sorted.