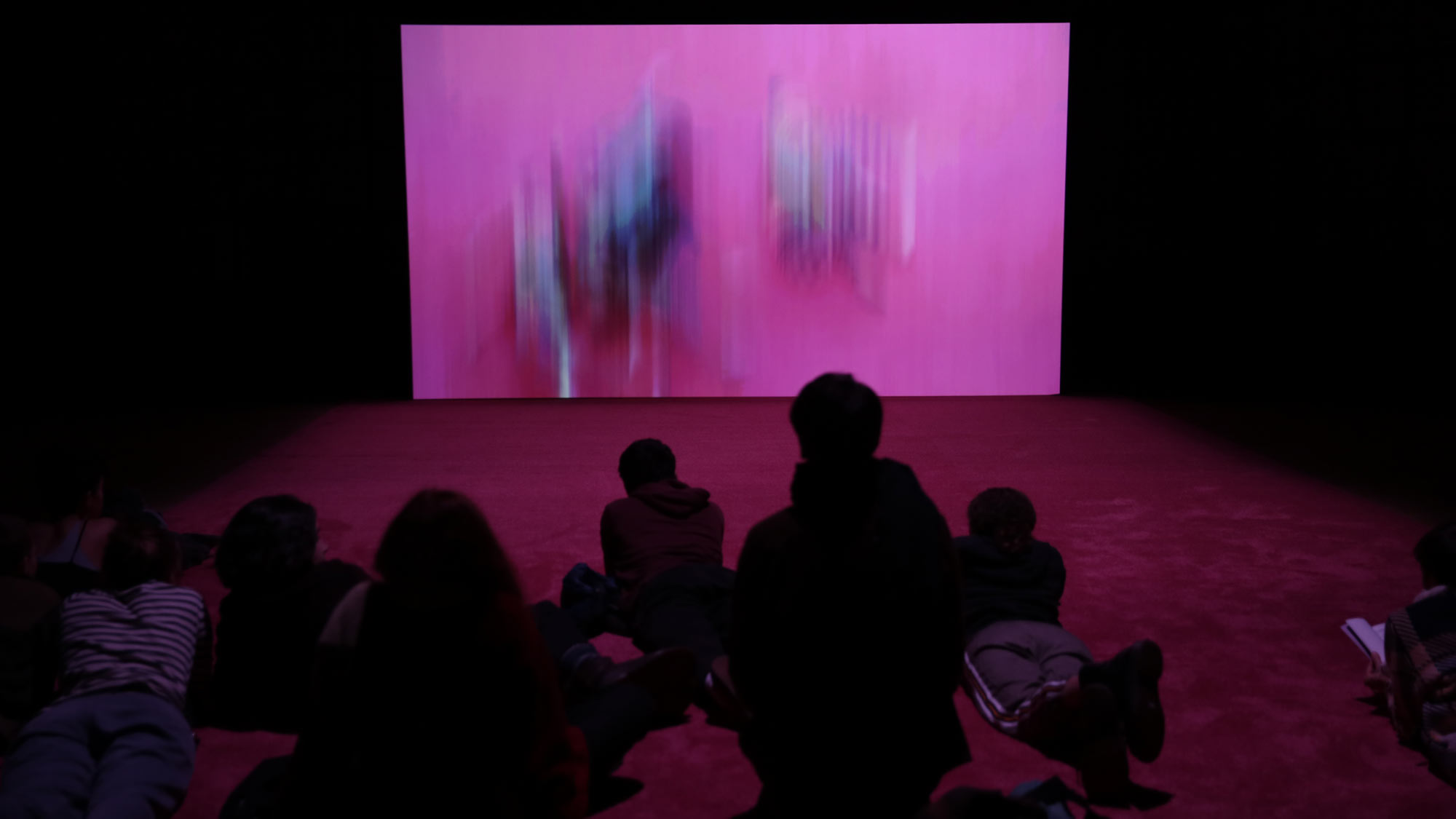 The US premiere of Maria Hassabi’s SlowMeDown, a moving-image installation commissioned for EMPAC’s 10YEARS celebration.

Partially filmed while Hassabi and her dancers were in residence this spring, the work features material from Hassabi’s live installation, STAGING (2017), which was presented internationally in public spaces, museums, and exhibition contexts. Blending collage and post-production effects, SlowMeDown builds a hyper-real frame that augments this footage and participates in the construction of what Hassabi calls a “performative surreality."

Maria Hassabi (b. Cyprus) is a New York based artist and choreographer. Her practice utilizes stillness and deceleration as techniques in choreographies that oscillate between dance and sculpture, subject and object, live body and still image, testing conventional rhythms of viewership in the process.

Stillness and slowness are at the center of artist and choreographer Maria Hassabi’s practice. As she explained in an interview for the Walker Art Center, early in her career Hassabi had an impulse for live performances to stop so that she could look at them. Since then, Hassabi’s choreography features extremely, sometimes imperceptibly, slow moving dancers. In this work, she has not stopped the live performance, per se, but instead slowed it down such that we can all consider it in form and detail. This choreography first consists of an encounter with a seemingly still dancer or group of dancers. It becomes clear over time that these dancers slowly move their bodies very precisely from one position to another. As the choreography progresses, a complexity of formations emerge with bodies moving together to create shapes and moving apart to reveal empty space.

In 2016/17, Hassabi created a performative diptych titled STAGED? and STAGING, which shared an aesthetic, similar costumes, sound scores and movement material, yet were arranged in different structures to fit the context of their presentations. Both of these works also shared a now-iconic set: a large expanse of pink carpet. STAGED? is set in a traditional black box theater space. The audience sits in risers on the carpet surrounding the performers who move in the center of the space with concentrated theatrical lighting above them. This work has a beginning and an end. At a certain point the doors to the theater close to signal the start of the performance and at the end the doors open and the audience leaves together. The live installation, STAGING, on the other hand, was created for exhibition spaces. Performers move in places that the public navigates more freely than they would from a static seat in a traditional performance space. Here, the encounter with Hassabi’s dancers is more surprising. The audience wonders: is this a statue, is the person lying on the floor in need, or, is this in fact a piece of live performance? Together, STAGED? and STAGING highlight the distinction between performance in a theatrical space and performance in an exhibition space.

It is somehow fitting, then, that Hassabi expresses interest in another time-based art: moving image. SlowMeDown is Hassabi’s second moving-image installation and is designed for exhibition spaces. Working with video editing technologies and the live documentation of STAGING, Hassabi has the capacity to zoom in and accentuate her choreographic interests more precisely than was possible in a live performance setting. Editing a moving image has enabled her to elongate stillness beyond the physical capacity of her dancers and for formal elements like color to be abstracted and exaggerated with the addition of post-production elements including collage and animation.

Spatially, Hassabi’s installation continues her exploration of the self-reflexive encounter with unexpectedly still or slowly dancing body in a museum. This time, however, the audience follows the expanse of pink carpet from the physical space of Studio 2 into the mediated space of the screen that stands in its center, where Hassabi’s footage of the carpet and choreography extends back into the physical reality where her viewers sit and watch.

Hassabi thinks of SlowMeDown as a hyperreal frame for her work. This Baudrillardian push feels not like an extension of her previous work, where the slowed-down dancer brought an uncanny focus to the performative frame, but instead like a new study into the mechanics of reproducibility. 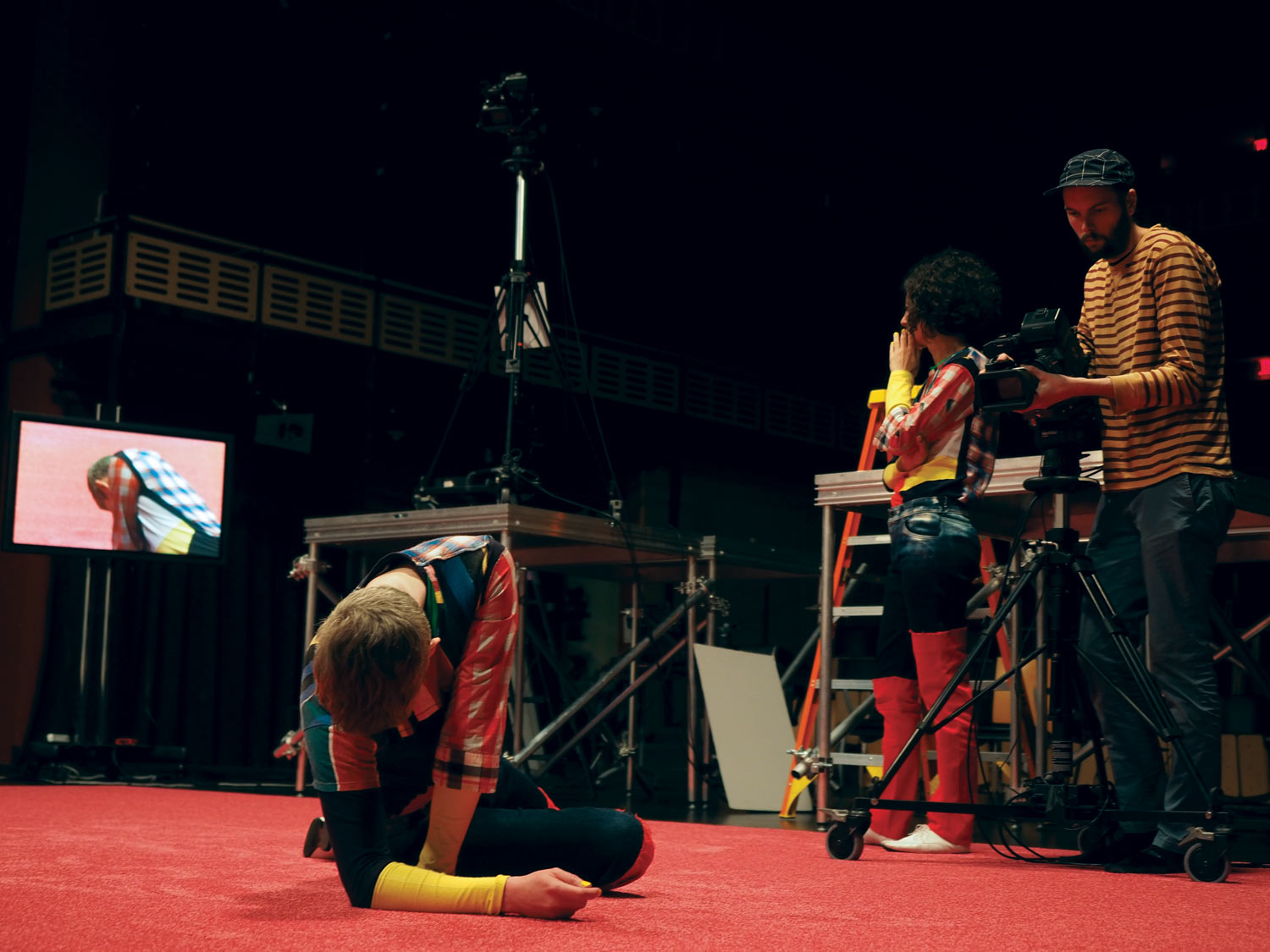