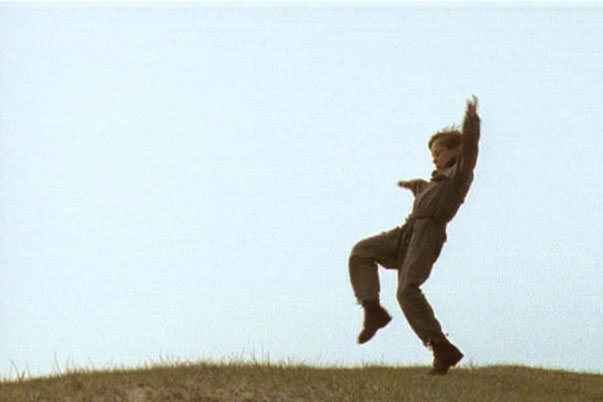 1988, 7', (USA) Choreographed, Directed, and Performed by Pooh Kaye An early gem from acclaimed performance artist and filmmaker Pooh Kaye portrays the hilarious, tumbling journey of one woman in the nether region of her snooze button. Using her signature stop-motion animation, Pooh Kaye falls out of bed and dances through a wacky apartment of morphing wall paintings, watchful shadows and animate furniture.

2004, 8', (Netherlands) Directed by Clara van Gool Choreographed by Suzy Blok Performed by Fifi Arp and Peter van Vuuren Inspired by the poem REIMERSWAAL by Gerrit Achterberg, a young couple engage in a mysterious mating dance in and under water, until the playfulness is lost, and they must swim quickly their separate ways.

1995, 5', (UK) Choreographed by Rosemary Lee Directed by Peter Anderson Performed by Tom Evans Music by Graeme Miller Filmed on the coast of Norfolk in England, this film explores the joyous, magical world of an eight year old boy who conjures up his imaginary twin. Alive with physical energy, and steeped in animal imagery and shamanism, the film gives us a view into the boy's private domain.

1994, 4', (France) Choreographed and directed by Philippe Decouflé Performed by Philippe Decouflé, Pascale Houbin, Annie Lacour Music composed by Robert Nyel & Gaby Verlor Music performed by Bourvil In this short film by the renowned French choreographer Philippe Decoufle, a couple sits at a table in a vast, wind-blown field, acting out the lyrics of the whimsical song "C'etait Bien" with precise gestures and a personal sign language. The sudden appearance of household objects falling from the sky, the saturated colors and the increasing use of time-lapse photography, combine to create a heightened sense of sweet absurdity.

2002, 26', (Nigeria/France) Choreographed by Heddy Maalem Directed and filmed by Benoit Dervaux Created by Nigerian/French choreographer Heddy Maalem and French filmmaker Benoit Dervaux, this startlingly powerful film creates an intimate and fierce portrait of contemporary Africa. Bringing together dancers from Senegal, Nigeria and French dancers of African descent, Maalem creates a series of dances in the silence of the studio, with only the dancers' breathing and footsteps for sound, and intercuts them with clanging scenes filmed in the streets. The raw energy and vitality of the dancers, the harsh realities of everyday life, and the clichés of Western perceptions of sub-Saharan Africa are all brought out in high relief by alternating our view of the dances in a darkened room and glimpses of life outside the studio.

1996, 26', (Switzerland) Directed by Pascal Magnin Original concept by Pascal Magnin, Marie Nespolo, Christine Kung Choreography and Performance by Veronique Ferrero, Marie Nespolo, Christine Kung, Mikel Aristegui, Antonio Buil, Roberto Molo In this sensual and joyful film by French filmmaker Pascal Magnin, six dancers tumble down the steep slopes of the Swiss Alps, amongst cows and shepherds, somewhere between heaven and earth, to join in a traditional village festival. The villagers welcome these scruffy newcomers into their festivities, where mischief, pranks and love run rampant. Inspired by a folk tale about three maidens who vanished because they ignored the prohibition against public dancing.

Special thanks to Gaelen Hanson of 33 fainting spells (Seattle), all the artists and filmmakers, and Dierdre Towers of the Dance Films Association (NYC). This program was drawn from titles shown in the Dance Films Association's annual Dance on Camera Festival co-sponsored by the Film Society of Lincoln Center with the support of the National Endowment for the Arts, Capezio Ballet Makers Dance Foundation and Lifestyle Media.