The edges of the cube and the leotard match the tincture which the artist has been applying for many years to his greying temples. A bright orange which contrasts perfectly with the green floor on which the female dancer is resting, arms braced beneath her torso, leg bent. This image, chosen by Triangle France for the poster for Charles Atlas’s latest production Tesseract □, is never to be found in the film. Meanwhile, a sandy landscape containing in the background a sort of space base has been embedded in post-production on the green ground. But the arresting contrasts of the image must have made it popular among other communication media which thus immediately disseminate the making of the film even before the first images have been seen. Other indiscretions in the wings and manufacturing secrets circulate. In particular, there is the photograph in which two dancers bend as if indifferent to the heavy camera trained on them, and an overall view of the studio which displays the technical arrangement surrounding the green-lined set. If what is involved here is just the documentation distributed around Tesseract □, it has come to pass on numerous previous occasions that the production methods burst onto the very arena of Charles Atlas’s works. In Roamin’ I, produced in 1980 in Merce Cunningham’s studio, you could see dancers taking part in a choreography especially devised for the camera, “avoiding the wires, equipment and film crew, staying close to the walls or crawling over the floor so as not to bother Atlas”.1 More recently, at the South London Gallery, the project titled The Pedestrians, devised together with Mika Tajima, consisted in a film-set installation across which visitors were invited to stroll while the shoot was underway, with Charles Atlas at the controls behind a mountain of monitors. So a way of broaching the artist’s immeasurable œuvre would perhaps be to cross this flat and polymorphous surface he operates on: the set. In the seventy odd films made by Atlas since the 1970s, not to mention the installations and performances, the set always seems to be that ‘queer’ space, at once a place of representation and production, and a dance and television studio, where dancers, fitters, cameraman and choreographers all busy about, willy-nilly, in shots and reverse shots alike.

It is said that Charles Atlas was working as a dogsbody in the wings of dance studios when he met Merce Cunningham in the early 1970s. The latter was then working on an explosion of danced figures on the set, whose four sides henceforth functioned like stage-fronts. The different choreographic elements were independently conceived and developed within a unified space but without any vanishing point. This stage dispersion gave rise to a new form of floating attention in the spectator, whose eye can easily forget a part of what happens on stage, and just follow the movements of one dancer, then another, and let himself daydream. This infinite number of possible trajectories of an eye on the set is what Atlas chose to grasp to create films, and what he in his turn displays. At the same time as he reflects about how to cast his eye on these dancers, he learns how to master apparatus, whose increasing mobility and lightness will gradually permit the eye to become a dancing body among the others. While the field of dance in which Atlas evolved did away with any head-on relation with the spectator, it was a matter of reconstructing the choreography, bit by bit, for video. In tandem, however, there developed another form of spectacle which captivated Atlas just as much: television. Atlas did not seem to be attracted by the ubiquity permitted by the cathode spectrum, a retransmission at the heart of households, as much as by the mechanisms for constructing a programme and, once again, by the forms of attention created by it. Atlas spent a lot of time watching Andy Warhol who, in the late 1970s, turned his studio into a TV set and produced a series of programmes broadcast on cable. In the same logic, Charles Atlas, who would also make a few programmes for the small screen, grafted television gimmicks onto the dance set. He adopted the idea of a live montage which is to be found in a certain number of his projects, but also the frontal address to the camera, whose frame at times abandons the body in its entirety, and closes in around the face. The most eloquent example of these sets thus put together is probably to be found in the first few minutes of Hail the New Puritan, made with the choreographer Michael Clark in 1985-86. Rubbing shoulders here, in a permanent scanning movement head-to-head with the camera, were leotard-clad dancers traversing the set and scenery changes.

Tesseract takes this ambiguity about the status of the set and the intermingling of systems of attention to another dimension. As a play in two parts created in the EMPAC studios in New York State, it has the specific feature of having been conceived at once as a 3D film with dancers, Tesseract □, and as a choreographed play, Tesseract (□), itself taking place in the context of a shoot happening before the spectators’ eyes. At the front of the stage, Charles Atlas, with his back to the audience, manipulates the images of the performance which are captured and transcribed in real time on a screen. I have only seen the square part of Tesseract (with 3D glasses); a film where that “flatland” represented by the set encounters “spaceland”, i.e. the technology of the stereoscopic image and a certain imagination of the fourth dimension. 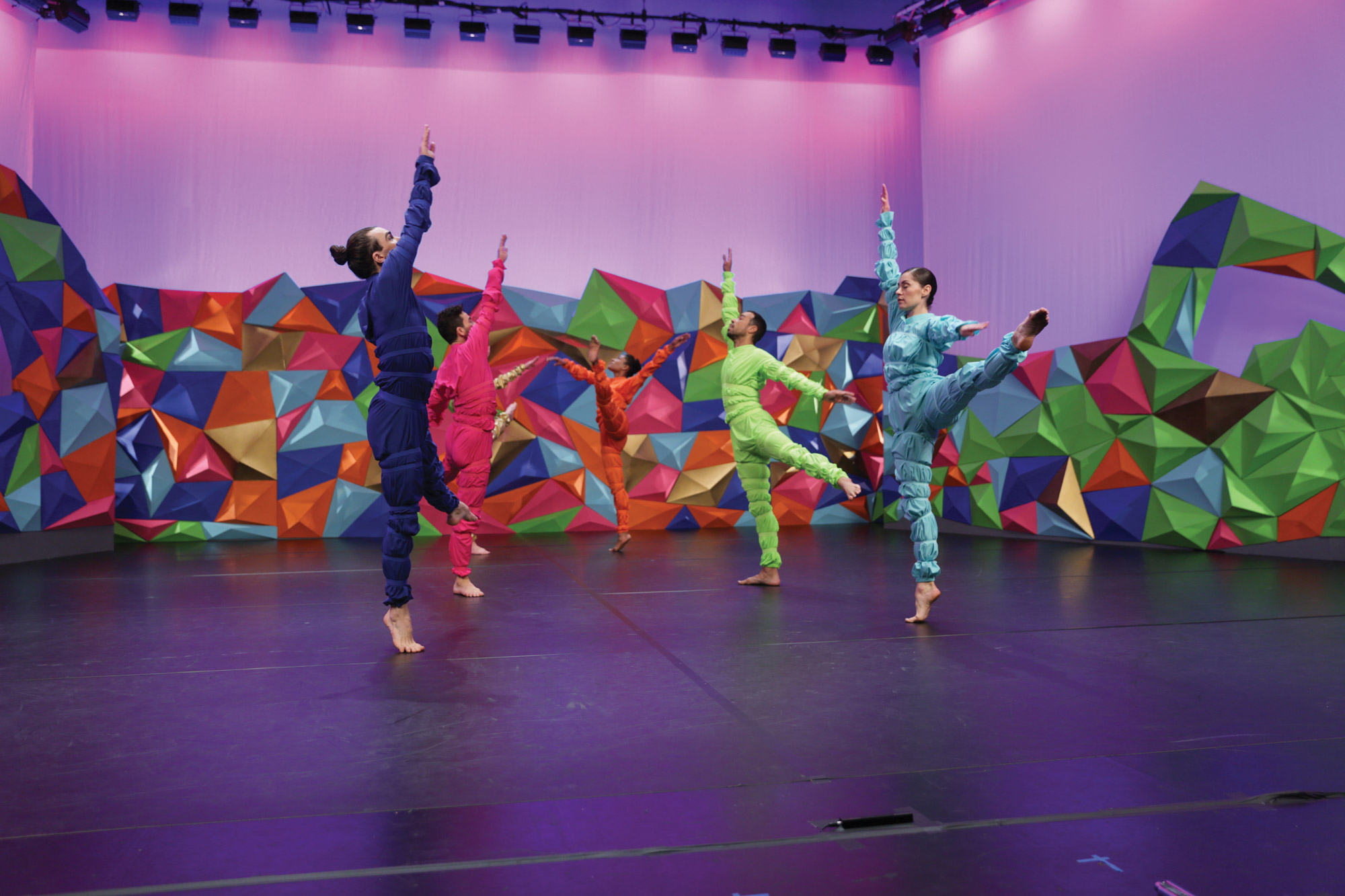 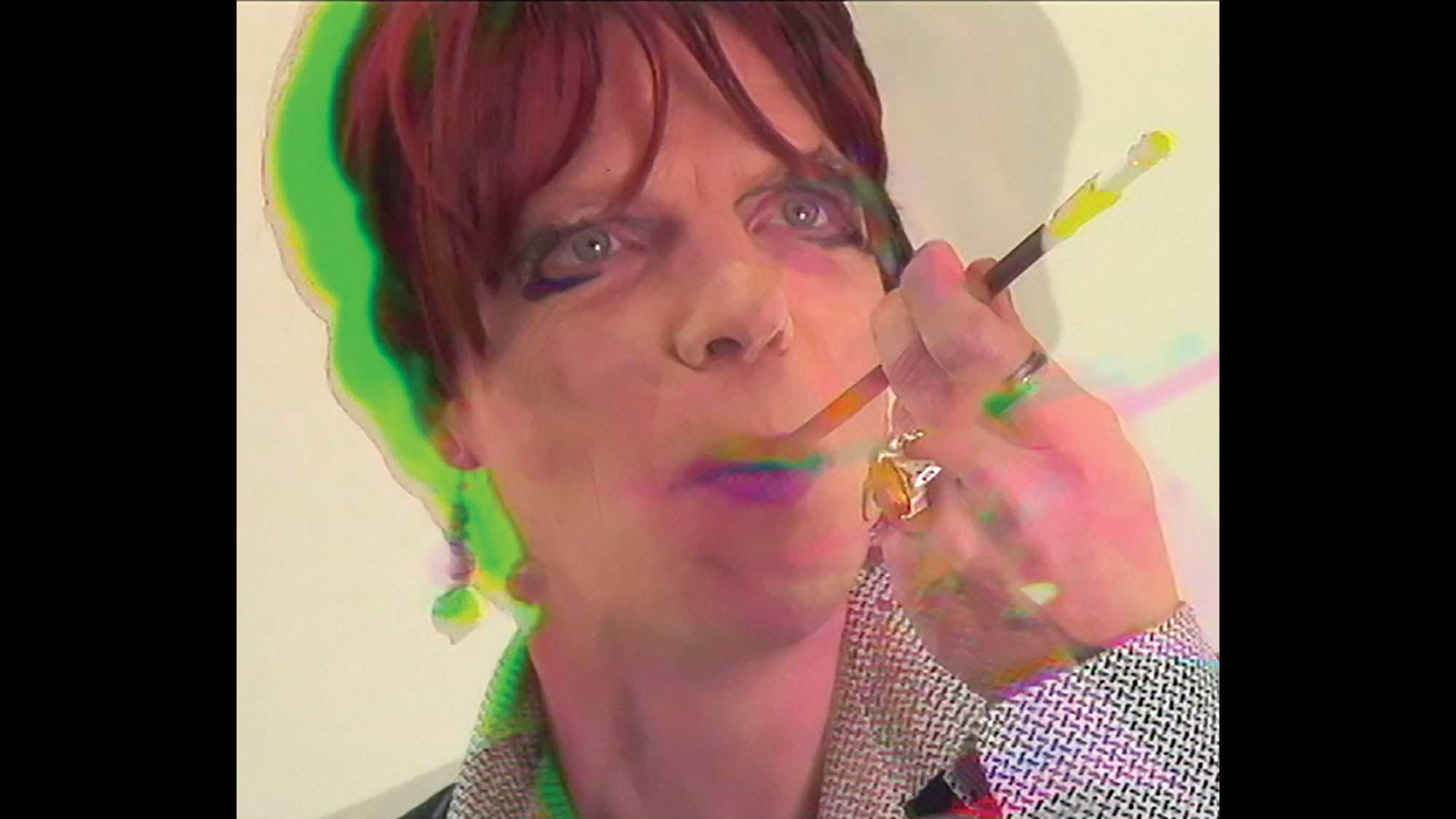