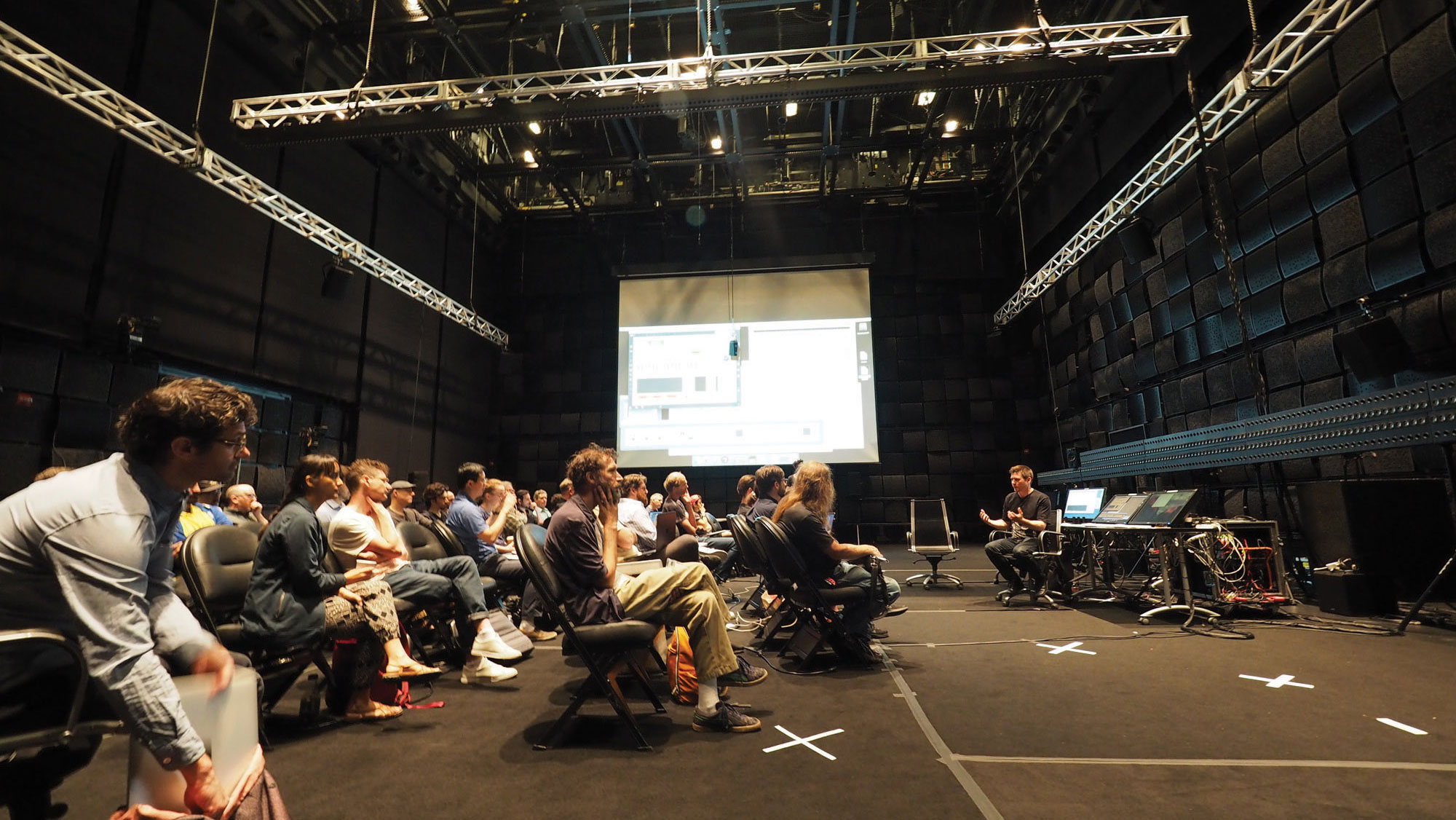 The EMPAC Wave Field Synthesis Array is a 558-channel discrete loudspeaker array designed to take advantage of the added sound-stage dimensionality made available through the use of wave field synthesis (WFS). EMPAC embarked on the design and construction of this high-density loudspeaker array with the goal of increasing the high-frequency resolution of current, traditional, horizontal WFS systems while creating a modular, easily deployable, and accessible solution for research, composition, and presentation.

Wave field synthesis (WFS) is a spatial audio rendering technique that places virtual sound sources in real space. The synthesis is precise and physically correct. You cannot distinguish the synthesized source from a “real” wave field at frequencies below the upper frequency limit of the system. Human auditory perception is the same as it would be in a real sound field.

A large number of small, independently controlled loudspeakers are required to create a physically correct synthesized wave field. While stereo or commercially available surround techniques rely on the listener being in the “sweet spot,” a very limited area where the proper localization of sounds can be perceived, WFS allows listeners to be anywhere in the active sound field and still perceive the accurate placement of the virtual sound sources.

In 2015, EMPAC embarked on the design and construction of a high-density wave field loudspeaker array with the primary goal of increasing the high-frequency resolution of current horizontal WFS systems, while creating a modular, easily deployable, and accessible solution for research, creation, and presentation. In WFS, the distance between the loudspeakers’ centers determines the highest frequency at which synthesized wave fields can be rendered physically correct. Above this cutoff frequency, distortion of the wave field occurs due to spatial aliasing of higher frequencies. The majority of the systems currently in use have speakers spaced between 10cm and 12cm apart. A WFS system with 4-inch drivers spaced at 12cm will produce an effective wave field with a maximum frequency of approximately 1400Hz; at 24 cm (8-inch drivers), the top frequency is roughly half that, around 700Hz. The localization of sound and the definition of timbre in speech and other acoustic events lean heavily on frequencies 2kHz and above. We wanted to build a WFS system that produces immersive wave fields with the prominent and non-dominant cues used in localization and spatial perception being generated in a physically correct way.

The concept of an array with a smaller distance between loudspeakers than currently available, and with a greater number of channels held promise. The EMPAC WFS system spaces the loudspeakers at 5.8cm, which results in a system capable of generating coherent wave fronts up to around 3.3 kHz. The EMPAC array has the added benefit of eliminating every other driver from the field, so one is afforded a real-time A-B perceptual study of what these high-frequency components contribute.

The array is comprised of 3 primary systems:

(A small ancillary subwoofer array can be deployed to fill out the lower octaves below 140Hz, which are not realistically attainable given the size of the WFS driver and the geometry of its enclosure.)

The speaker array in total includes:

A desire for flexibility and exploration led to specific design considerations. The simulation of existing “real” acoustical environments (like the imprint of a concert hall heard in a smaller, significantly different listening environment) may certainly be a worthwhile research goal in order to understand more about acoustics in the natural world and hearing via analysis and re-synthesis. However, from an artistic perspective, this could be seen as rather limiting, since works of art are not always interested in imitating or simulating existing realities as closely as possible.

Building the system out of 18 linear arrays allows the end user to scale and form the system to the size and geometry of a given workspace, as well as experiment with smaller groupings of units placed in and around a performance or listening space in horizontal, vertical, or other orientations.

Each array has the following specifications:

The software used to drive the array is by default IRCAM’s SPAT. This application suite was chosen because of its development in MAX/MSP, its fairly broad user base, maturity, vast external object tool set and capacity to readjust to a myriad of multichannel output states other than WFS, such as Ambisonic. Hybridized playout states can be achieved with this feature. The first iteration of the system runs on two Apple Mac Pros, each handling half of the array. However, the system’s hardware, from the speakers back through the DANTE network, have no fealty to either computer hardware or wave field code, availing itself to more powerful systems as technologies leap forward in processing speed. If a computer will run DANTE drivers and has adequate speed it can mount and run the EMPAC WFS array.

In 2019, a paper was presented at the 23rd International Congress on Acoustics titled The EMPAC High-resolution Modular Loudspeaker Array for Wave Field Synthesis.