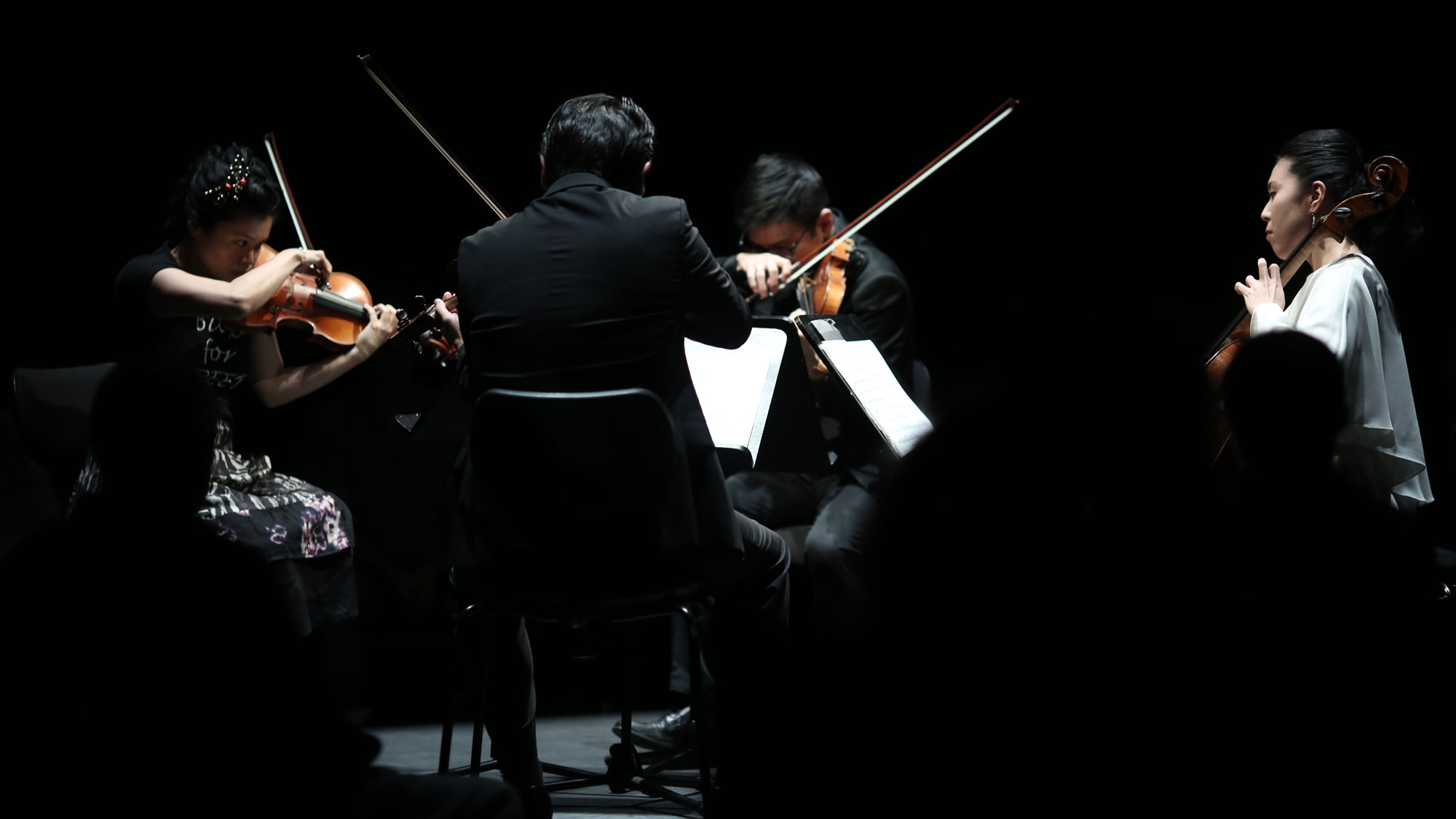 Kicking off the 10YEARS celebration, Formosa Quartet leads guests on a unique musical journey throughout the EMPAC building. Performing in all four EMPAC venues— the Concert Hall, Theater, Studio 1, and Studio 2—the ensemble will showcase classical repertoire particularly suited to the distinct acoustic profile of each space. Throughout the show, the audience will be led from venue to venue to hear how, in performance, the room is as important as the musicians and music.

Regarded as one of the very best quartets of their generation, Formosa Quartet formed in 2002 when the four founding members came together for a concert tour of Taiwan. Committed to championing Taiwanese music and promoting the arts in the land of their heritage, as well as exploring diverse and adventurous mediums for string quartet, Formosa have performed in major venues throughout the United States, Asia, and Europe.

With degrees from the Juilliard School, Curtis Institute of Music, and New England Conservatory, the members of Formosa Quartet—Jasmine Lin, Wayne Lee, Che-Yen Chen, and Deborah Pae—have established themselves as leading solo, chamber, and orchestral musicians and have been top prizewinners in numerous prestigious competitions, including both the First Prize and Amadeus Prize at the London International String Quartet Competition. Formosa Quartet performs on Joseph Curtin (2001) and Andrea Guarneri (1662) violins, an Enrico Catenari viola (1680), and a Vincenzo Postiglione cello (1885), on generous loan from the Arts and Letters Foundation.

The 10YEARS celebration begins with an initiatory journey through EMPAC’s four venues. Highlighting the intangible acoustic auras of the Concert Hall, the Theater, and the two Studios, the Formosa Quartet will take the audience through the quartet of spaces performing the most fleeting of time- based arts: music.

String quartets have been composed over the past almost 300 years in Western culture as the most condensed form of music leading four voices together, against each other, in joint and independent movements. With the spread of Western culture during the 20th century, other musical traditions entered their sphere. Performing string quartet repertoire spanning this history and selected for each performance space, the Formosa Quartet invites the audience to travel through space, time, and cultures.

Starting out in the Concert Hall, the audience sits on the stage facing the back of the hall, where the quartet plays far away at the top of the balcony. This highlights a unique property of the Concert Hall, which was specifically designed to have any sound come to the audience from any place in the hall with the same quality as if they were playing on stage. The movement of the string quartet by Austrian composer Joseph Haydn, regarded as the composer who established the string quartet as genre, comes from far away in time and space.

Studio 1 is the space with the shortest reverberation time of all the venues. The audience sits in circles close to the string quartet in the center. The proximity of musicians and audience, the acoustics of the space, and the driving intensity of the music create heat. It’s hardly imaginable that this music was composed almost 100 years ago and only five quarters of a century later than the Haydn piece.

Studio 2 is set up the opposite way to Studio 1; the audience sits in circles facing outwards, and each of the musicians is positioned at the center of one of the four walls. The Art of the Fugue was composed in the last decade of Bach’s life, between 1740 and 1750. It’s an ongoing debate for which instruments it was composed, if intended for any specific instruments at all. This last fugue Bach wrote was left unfinished and, in this performance, it will end with the last bar Bach wrote. A fugue is a highly specific framework where the voices are independent and joint at the same time. Positioning the string quartet spatially around the audience spins the musical lines through the volume of the studio, so they meet in the space of each audience member.

In the Theater, the Formosa Quartet is invisible, sitting in the orchestra pit in front of the stage. Composer Shih-Hui Chen received her musical education in Taiwan and the USA, where she currently lives. In 2010, with a Fulbright Scholarship, she was able to live in Taiwan for a year while studying the music of the Han and indigenous peoples there. During this time she collaborated with the anthropologist and filmmaker HuTai-Li on a film project entitled Returning Souls. The film traces the efforts of young Amis members to return the souls of three wooden pillars with carvings of Ami ancestors that were removed from their community following a hurricane in 1958 in order to preserve them. The main melody of this composition is taken from an improvised song by one of the tribal elders. This quartet version was commissioned by the Formosa Quartet.

For the final piece in the Concert Hall, audience and musicians are in their traditional juxtaposition, the quartet on stage and the audience in the so-called orchestra seats. Lei Liang is a Chinese-born American composer who was commissioned by Formosa Quartet to create Song Recollections. He says of his piece:

“With decades-long political tension simmering across the Taiwan Strait, I greatly appreciate the fact that this project brings forth an unusual collaboration between a group of musicians from Taiwan and myself, as a composer from mainland China. Preparing to compose this piece offered me the chance to study the art of Taiwanese people and their incredibly beautiful songs—songs of desire, longing, friendship, and spirituality.”

This Performance will move between all four venues.