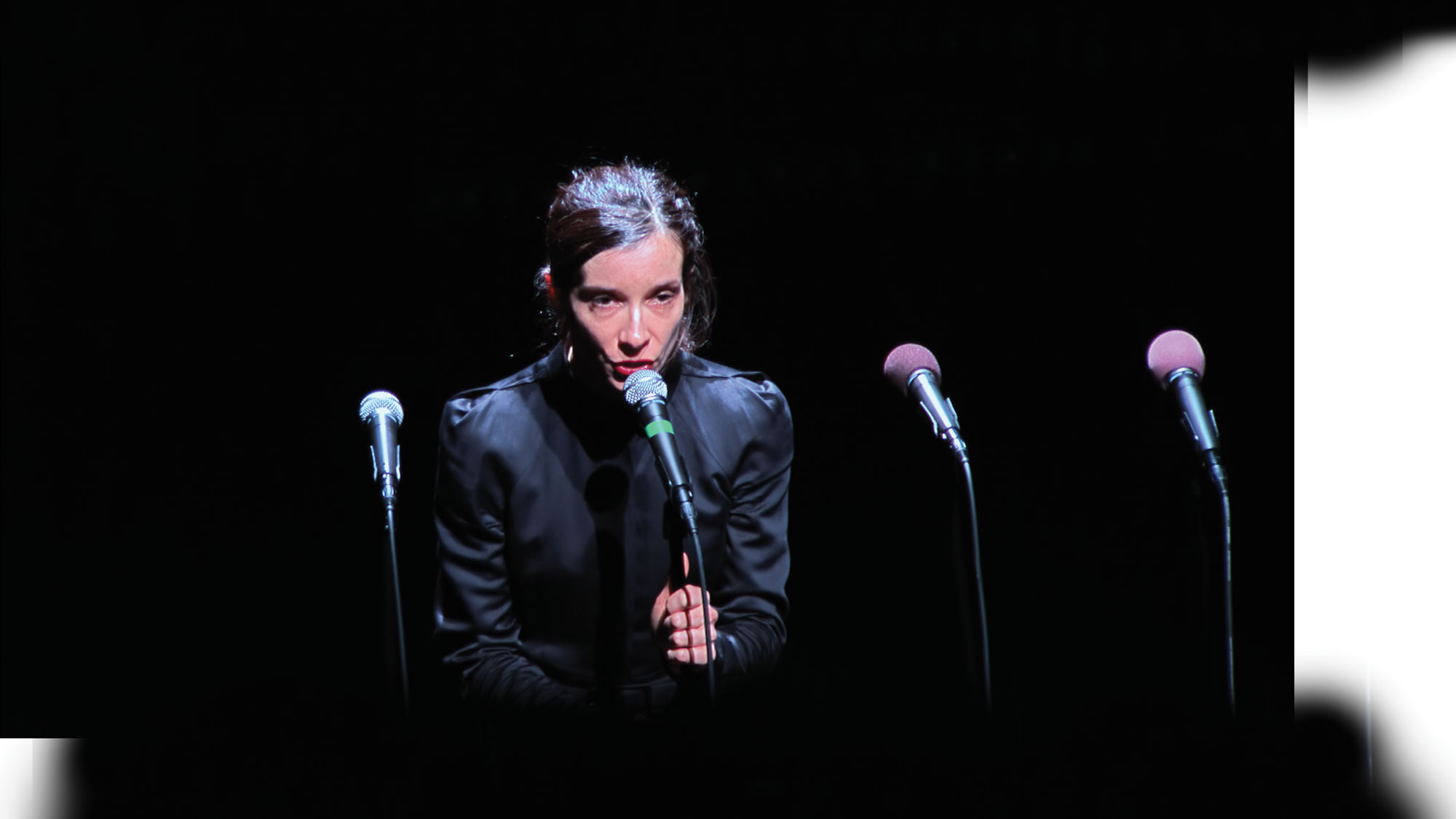 "By turns rousing, seductive, serene, introspective, meditative and life-threateningly dangerous — with a rock ‘n’ roll attitude — this piece grabs the spectator... Right from the beautiful opening scene — in which Beutler once again brings to life her fascination for the domain between the visible and the invisible, between presence and absence — the performance unfurls, revealing its true identity: a soul-stirring concert."
—Jury Report, September 2010

Nicole Beutler works with the tension between intense emotionality and cool calculation while also reflecting on the history of theater. How do we look at emotions—what moves us and what doesn't? How does the past resonate in our contemporary reality? These are issues that are at stake in Nicole Beutler's work. Always searching for new forms, she currently is drawn to working with existing texts or dances.

By Nicole Beutler / nb in collaboration with Sanja Mitrovic and Gary Shepherd 1: Songs is a dramatic solo performance in the style of a rock song-cycle that crosses rough terrain. Performer Sanja Mitrovic channels the final words of tragic female protagonists from the history of theater, including Antigone, Medea, and Gretchen, allowing their timeless cries of suffering to enter her body and distinctly contemporary voice. As she shouts, speaks, and sings, she violently shifts between characters, at times fragile, raw, calculating, or emotional. Created by director and choreographer Nicole Beutler, with electronic music by DJ/composer Gary Shepherd, 1: Songs asks us to reconsider the words of these classic literary heroines (and anti-heroines) in the here and now. Who is speaking? What do these words mean today? Where does the character end and the performer begin?

By Nicole Beutler / nb based on Radial Courses (1976) + Interior Drama (1977) by Lucinda Childs Fascinated by the radical and deceptively simple minimalism of American choreographer Lucinda Childs' early work, Nicole Beutler has remade two of her silent dance pieces, Radial Courses (1976) and Interior Drama (1977), setting the latter to specially composed music. The underlying choreographic scores used by the dancers while performing are fiendishly complex. Radial Courses is based on three movement sequences in a constantly shifting, circulatory composition. In Interior Drama, five dancers conform to an apparently perfect system, moving in repetitive and hallucinatory patterns. Childs describes her own work as an "intense experience of intense looking and listening." Beutler's reinterpretations focus on the individual dancer's roles and actions within the group patterns, revealing parallel realities and the ritualistic qualities of both dances.

Nicole Beutler is a choreographer, curator and performer based in Amsterdam. Her work is situated on the threshold of dance, performance, and visual arts. She seeks to precisely articulate sense and experience through performances, installations, and books. Her performances are composed musically, and suffused with subtle humor. They are characterized by minimal stage sets and a focus on the performer as a human being.

In 2005 Beutler co-founded LISA, the Amsterdam-based theater makers' collective. From 2008 to 2010, she was dance and performance curator at Frascati Theatre in Amsterdam. She collaborated for years with choreographer and performer Paz Rojo and has worked with David Weber-Krebs, Hooman Sharifi and the live art group Private Thoughts in Public Places. She is an artistic adviser for choreographers, and a guest teacher at the School for New Dance Development and the Mime School at the Amsterdam School of the Arts (AHK).